I found another folder of drafts I'd started but never posted. The next three posts are from trips in January and February.

This one was from our planning session for MasterWorks, which starts in three weeks! I understand Winona Lake, IN, is now looking much more like the summer haven we all love!

So much for warming up down South From my trip to Atlanta in March. I was hoping to, well, warm up. This mural at the Charlotte Airport features Psalm 98.

The Year of Living Biblically

So I was glad to see a condensed version in Relevant Magazine: My Biblical Year.

posted by Rich and Joyce Swingle @ 5:19 PM   0 comments links to this post

On May 17 my wife, Joyce, was a part of a prayer team praying for her sister, Amy, who was going to have a brain tumor removed on May 20. The doctors had told her that part of the tumor was wrapped around nerves that control swallowing, so they were going to leave that part of the tumor and treat it with radiation. Joyce felt led to pray that the tumor would cluster so that the tumor could be completely removed. Before the operation the surgeon reconfirmed the need to follow up with radiation. I was there when the surgeon came out, and he told us that the tumor had somehow clumstered together and they were able to remove it completely. No radiation will be needed, and he won’t need to see her again for another year.

The next morning Amy’s husband, Wallie said to the surgeon, “So, I understand there’s a chance that you won’t need to do radiation?” The surgeon replied, “There’s no chance we’ll do radiation. We got it all.” Wallie pressed, “Will you have to do another MRI to make sure it’s all gone?” The surgeon said, “I was in there. There’s nothing left.”

On May 24 Amy was released. Her kids, who were quite excited to have their mom home again.

posted by Rich and Joyce Swingle @ 2:09 PM   0 comments links to this post I found several blog posts that I'd started on my Treo and never sent, so all the posts today are from various times and places.

This statue is near Mt. Shasta in northern California. I took it on the way to perform at the church that was pastored by Mike Yakonelli before his untimely death. His son, Mark, set up the performance, and Mike's widow still attends, as do many of the folks mentioned in Mike's books.

posted by Rich and Joyce Swingle @ 1:49 PM   0 comments links to this post

Allow God to Love You From our trip to Guatemala last year...

Mark Yaconelli, who ran against me in high school cross country and track we realized, is closing strong. He's sending us forth not as artists and speakers, but as spiritual leaders. His greatest assignment to us is to wait upon the Lord. He said, "Cancer is our Sabbath." So many look forward to getting sick because we don't set aside time to rest. When someone gets cancer they spend time contemplating life as they rest. As spiritual leaders we must spend that kind of intense contemplation on Life even when we're healthy.

He encourages us to keep things small, to follow the thread. The Artist sees the big picture, but He wants us to contemplate on the present moment.

posted by Rich and Joyce Swingle @ 1:43 PM   0 comments links to this post This church has been called Llevias de Gracias (Rain of Grace) for 26 years. Last year Compassion put in a water filtration system that allows them to sell bottled water to the community. They sell it at such a low price that everyone in the community can afford it. It's a great way to share God's love for them.

posted by Rich and Joyce Swingle @ 1:38 PM   1 comments links to this post

They're doing it again! Every time I've seen people share from the depths of their souls I've seen God work at deeper levels. Chris Davey, one of the faculty shared that he was a homeless drunk who wandered into a Salvation Army rehab center just to get off the streets. He didn't want to have anything to do with the Gospel. But God started working on his heart, and now he's sold out! He even trusted the Lord to carry him through a bout with one of the worst kinds of cancer.

posted by Rich and Joyce Swingle @ 1:36 PM   1 comments links to this post From last year...
We were just at the Evergreen museum that hosts Howard Hughes' Spruce Goose (though he preferred to call it the Flying Boat). It's in McMinnville, Oregon, home of the News-Register, the paper for which I was a correspondent and photographer while I was in college.

One of the planes in the museum was this TBM my dad flew before I was born. He writes:

On August 3, 1966 I
flew TBM N5260V (the plane pictured here) from El Mirage California to Chico. The total flight time was 4 hours including the flight test after installing a different engine. It caught on fire when we first started it, so we had to repair some cowling fasteners and wireing. Most of the side glass was gone and it was full of sand, so I needed goggles to see. Aero Union bought 3 TBMs and 1 PV-2 from a defunct company, probably Riverside Aircraft. Of the 3 TBMs I was the only one that made it non-stop. The others had to land for repairs.

posted by Rich and Joyce Swingle @ 1:33 PM   0 comments links to this post I came across this draft from last summer's Christians in Theatre Arts Conference, and since this year's is rapidly approaching I thought I'd post it...

There was just a dance that blew me away. Most near me were sobbing by the end of it. Not a word spoken, but it was a profound exploration of marriage and death. The choreographer, Colin Harbinson spoke on the death of a dream.

He said that many artists have been wounded in some way: don't live in your woundedness. As artists we should be leading people out of a place of death into Life.

He had a project in China that died, but 15 years later he was invited back to produce The Messiah. The paper ran an article titled, "The Messiah touches people." Annondale High School, where I performed and taught today, just outside Washington, DC, has this wreck parked outside the school as a reminder of the devestating consequences of drinking and driving.

posted by Rich and Joyce Swingle @ 9:46 PM   0 comments links to this post

Joyce's sister was cleared for release from the hospital tomorrow morning! Thanks for all the prayers and notes of encouragement! I'll pass them along.
Rich

posted by Rich and Joyce Swingle @ 9:44 PM   0 comments links to this post

My nephew, the city planner My nephew plans to build wonderful cities in the future.

posted by Rich and Joyce Swingle @ 5:18 PM   0 comments links to this post

We just visited Amy in the recovery room. She was smiling and in good spirits. Thanks again for your prayers!
Rich

posted by Rich and Joyce Swingle @ 1:35 PM   0 comments links to this post

The surgeon just came out to tell us that it went better than expected! They were concerned because the brain tumor had wound around the nerves that control swallowing. They were going to remove them and then treat it with radiation, but when they got inside it was all in one lump, as we had prayed. They won't do radiation at all unless something returns, but we're praying that it won't. Thanks for joining with us in prayer!
Rich

The brain tumor was removed successfully! They expect another hour or so to finish up. Thanks for your continuing prayers.
Rich

We just got a call to say that the surgery is half way finished and going well.

Joyce's younger sister is undergoing an operation to remove a benign brain tumor.

At this point, the initial incisions have been made; the doctors told her husband that it is going well, but will probably be a four hour surgery.

Please continue to pray for
perfect removal of the tumor,
that the tumor itself be contained in one easily removed lump,
against any brain damage itself;
that the neural networks regrow and reform as God intended them;
that the effects of the surgery and anesthesia be easily overcome and healed from;
that salvation and peace would come to the entire household as a result of God's faithfulness today;
in praise to the Living God whose love is too great to express in human words and whose joy abounds in the hearts of His beloved.

Thank you so much.
With love,
Pastor Joyce

I'm loving the Prince Caspian soundtrack! I've been playing it over and over again. I'm bummed that I couldn't get there opening weekend because I was at the GI Film Festival with Ken Wales. We're hoping it will do even better the second weekend than it did the first. That would be a miracle, but we know those are possible. If you haven't seen it yet, don't let this week go by. It's so important for films like this one to do well in order to make room for others.

Here are some reviews:

'Prince Caspian' pushes 'Iron Man' off throne
‘Prince Caspian’ Rules at the Box Office
Out of the Wardrobe, Into a War Zone 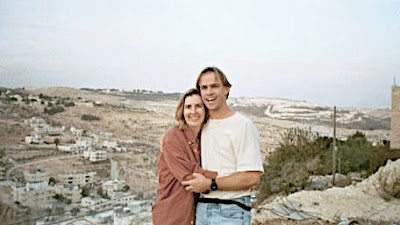 This is a shot of Joyce and I in Bethlahem in 1999. Our church, Westchester Chapel, be returning to Israel next February, and I'll be performing sketches of stories where they took place.

Here are some that we're planning (subject to change):

"Elijah" on the top of Mt. Carmel
"Peter's Trip to Caesaria by the Sea" at Ceasaria by the Sea's amphitheatre
"Gideon" at Gideon's Spring
"The Last Supper" near the Garden Tomb
"Peter Walks on Water" on the Sea of Gallilee


You're welcome to join us!

Prince Caspian is on it's way!


I just came across a good interview with director, Andrew Adamson. Among other things, he reveals that Michael Apted, who directed Amazing Grace, will helm Voyage of the Dawn Treader, due in 2010. Also, it points out that The Lion, the Witch and the Wardrobe was in the top 30 films of all time around the globe. We're at our church's District Assembly (http:MNYNaz.org). These youth represent the 50 hispanic churches on our district. They have a vision to reach 30,000 hispanic youth in the coming year. What a joyful noise that will be!

posted by Rich and Joyce Swingle @ 9:49 PM   0 comments links to this post 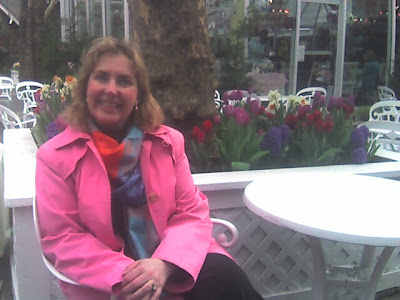 On this day in 1993, four years to the week before we met, Joyce committed her life to the Lord. In a sermon at our church last week she shared how a co-worker told her that the radical changes in Joyce's life after that day added up to the first miracle that co-worker had ever seen. I'm delighted to spend my life with that miracle!

As we're getting closer to the start of MasterWorks I was working through details with our faculty.  I wanted to share the following note from Bev Holloway.  A more complete bio of her work as a casting director in Hollywood is now online at http://MasterWorksFestival.org.
We still have a few more openings in the program, so be sure to get your application in soon and/or send your friends to http://RichDrama.com/MWF.
in Christ alone,
Rich
Begin forwarded message:

Thanks for the opportunity to watch and talk with your actors.  I am really

looking forward to it!

posted by Rich and Joyce Swingle @ 5:16 PM   0 comments links to this post