After a month in release Fireproof is still #11

Going into it's fifth weekend, Fireproof is maintaining it's place of #11 at the box office, and the film with a $500k budget has now crested $24M according to Variety.

Tale of Two Cities is a big hit on Broadway

I'm glad to see there are others that share my thoughts about Tale of Two Cities.  Here's what I blogged after seeing it:
My favorite theatrical hours of late were spent at the new musical, A Tale of Two Cities. While creating our documentary on Eric Liddell (details will be announced soon for our Western Hemisphere debut) we discovered that Liddell was meorizing the last three chapters of Dickens' masterpiece. It truly is worth meditating on the story of a man giving his life for another. The whole cast was great, but James Barbour, who played Sydney Carton, was extaordinary. Right from the start he was making choices that were absolutely captivating.
Rich
Begin forwarded message:

Could Tale of Two Cities be the Next Les Miserables on Broadway?
Teresa Neumann (October 30, 2008)

"The musical...honors the central theme, taken from Christianity, of sacrificing one life to save others." After performances, audiences stand, cheer, and weep.
Sounding like shades of the French Revolution—oppressed peasantry vs. jaded royalty—World Magazine has published an article exposing the deep cultural divide in America as it relates to the new Broadway musical A Tale of Two Cities, based on Dickens' seminal masterpiece.

Writes reporter Marvin Olasky: "The [New York] Times sneered at the production based on Charles Dickens' novel...another reviewer, from Toronto, complained about the reaction of apparently ignorant theater-goers: 'The audience stood and cheered . . . some even wept.'"
"That's what happened the night I attended," Olasky remarks. "The singing and staging were excellent, and the colorful Dickensian plot moved along and moved attendees. Afterwards, I wasn't surprised to find that most of the 85 online responses to the Times review gave the musical five stars (out of five) and included comments like 'the best of times despite The New York Times.'"
Olasky wonders if the criticism from New York elites is due to the fact that Jill Santoriello, who wrote the new show's book, lyrics, and music is a self-taught novice (a threat to the inner circle of well-educated and well-groomed professionals). Or, muses Olasky, it could be that theology plays a role considering the main theme of Dickens' novel is self-sacrifice centering on the Scripture"I am the Resurrection and the Life."
Regardless, it seems the people have spoken, and in New York—as it is everywhere—if they continue to come, the play will go on.
Source: Marvin Olasky - World Magazine

posted by Rich and Joyce Swingle @ 4:23 PM   1 comments links to this post

Screening our documentary in NYC

We finished our documentary Olympic Hero in China: The Eric Liddell Story in time for the Olympics. I had opportunities to share before and after screenings in Hong Kong and Macao.

While I was there I got to do the English narration, and that version is nearing completion. We're going to screen it November 14 in New York City and November 20 in White Plains, NY. For more information visit RichDrama.com/OlympicHeroinChina.

Altogether we were in Asia for five weeks surrounding the Olympics. You can see updates in the August and September archives on my blog. I also posted some things long after returning in the October archive.

We're hoping to return in the spring to film dramatizations, which we'll fold into the documentary.

posted by Rich and Joyce Swingle @ 8:14 PM   0 comments links to this post

Last night I portrayed The Good Shepherd and Joyce preached on John 10 for the InterVarsity Christian Fellowship (http://www.intervarsity.org) at Cooper Union. In the documentary Changing Lives: The Peter Cooper Story I got to do the voice of Peter Cooper, who founded the school. It continues to operate on his principal that the college should be free. I'm sorry to say they don't offer a degree in theatre! So that students appreciate the value of their education, they are each awarded a full scholarship, which declares it's value at $30,000.
What a great group of students we met! Their worship and fellowship was so heartwarming. It made me wish I would have attended a student fellowship when I was in school. I remember making the choice not to attend because I was so busy, and because I had my own church. But the value of knowing some fellow Christians on campus, worshiping with them and lifting each other up in prayer would have been so valuable.
Should I ever be called to another degree at a secular school, I'll know what to do!
This group was started by a young man from our church. It started last year as six students in his living room, and now they've already divided into two groups to accommodate schedules, and the one we attended had over thirty!
If your school doesn't have one, consider starting one. Joy Freschly can help. Her email is on the Contact page of http://MasterWorksFestival.org.

In its fourth week in theatres, Fireproof has only slipped to #11 at the box office, and it has now crested $20M according to Variety.

posted by Rich and Joyce Swingle @ 3:32 PM   0 comments links to this post

They were out of Countryman microphones posted by Rich and Joyce Swingle @ 8:25 AM   0 comments links to this post posted by Rich and Joyce Swingle @ 8:22 AM   0 comments links to this post My Treo can't come close to doing this justice!

It's easy to worship an Artist that paints like that!

posted by Rich and Joyce Swingle @ 8:20 AM   0 comments links to this post The air's a little crisper here, the leaves are certainly more beautiful, and it's great to be among a people ready to worship!

posted by Rich and Joyce Swingle @ 8:13 AM   0 comments links to this post

Fireproof still in top 10 after 3 weekends

I was delighted to see Fireproof stay in the top ten at the box office for it's third week. Their $500k investment has now made almost $17M.

posted by Rich and Joyce Swingle @ 2:36 AM   0 comments links to this post

posted by Rich and Joyce Swingle @ 9:54 PM   0 comments links to this post We always love the view at Manhattan Plaza, but tonight it's especially great.

posted by Rich and Joyce Swingle @ 6:42 PM   0 comments links to this post

The Daily Record, a British publication, just ran an article on a woman who was christened by Eric Liddell in a kitchen of the internment where she spent her first three years: 'Scots Olympic great Eric Liddell helped me survive concentration camp horror'.

posted by Rich and Joyce Swingle @ 3:11 PM   0 comments links to this post

The New York Times had good things to say about Fireproof

Today the front page of their Arts section ran an article on how well it's doing: It’s a Healthy Marriage of Faith and Filmmaking.

Followed by slides from our 22,400 miles in 36 days with 40 audiences, 5 nations of Asia surrounding the Beijing Olympics.

No charge; no donations allowed.

The documentary will also be screened on November 20 at our home church, Westchester Chapel. We'll have a free dinner at 6:30, and we'll start the documentary after 7pm.

I've already given the slide show about our trip to Asia at Westchester Chapel, so if you missed it, be sure to come to the New York showing.

Variety called it "The biggest surprise" of the week.

But Fireproof isn't just a theatrical marriage seminar. It's entertaining! For a cast made up mostly of amateurs this is truly remarkable film making. The makers of Facing the Giants are improving on their craft. The car on the track scene (I'm not giving too much away since it's glimpsed in the trailer) is so gripping because you know they didn't have the budget for CGI (which the credits confirmed). Our theatre on Times Square was packed, and people laughed so loud at the humor I've got to see it again because I missed so many lines! And on the other side of things I was moved to tears again and again.

Were there some holes? For what they paid and the experience they had you have to expect that. Was it an enjoyable, entertaining film. Absolutely!

See it soon to cast your vote for more films like it.

posted by Rich and Joyce Swingle @ 7:35 AM   0 comments links to this post 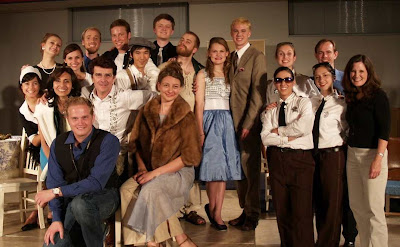 Thanks to Stephanie Terranova we now have shots from the MWF '08 Theatre program and production of Tartuffe online. Click here.

posted by Rich and Joyce Swingle @ 9:19 AM   0 comments links to this post