Amazon.com Widgets The Swingles' Dramatic Developments: What a classy cast

What a classy cast 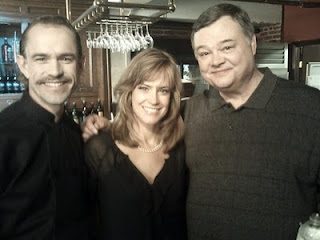 I had such a great time working on A Christmas Snow!

I played the role of Claud, who was a side-kick to Martin played by Craig, pictured here. Catherine Mary Stewart, who is beautifully playing the lead, will be here until the very end of shooting, which will be after 2 all-nighters Tuesday and Wednesday.

I shared the make-up trailer with Danny Cahill, who was the biggest winner on The Biggest Loser. I was SHOCKED to hear that he'd lost 239lbs. He doesn't look like he's ever been overweight in his life. It was so great that he was cast as... the food critic! Brilliant!

The crew was also amazing. Everyone on set was on top of their craft and a joy to work for or with!

posted by Rich and Joyce Swingle @ 1:30 AM   0 comments links to this post