This blog has moved


This blog is now located at http://richdrama.blogspot.com/.
You will be automatically redirected in 30 seconds, or you may click here.

For feed subscribers, please update your feed subscriptions to
http://richdrama.blogspot.com/feeds/posts/default.

posted by Rich and Joyce Swingle @ 1:58 PM   0 comments links to this post

A gorgeous day in Chicago! 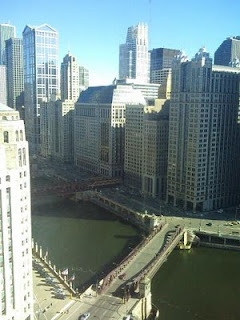 posted by Rich and Joyce Swingle @ 1:57 PM   0 comments links to this post

Our friend Dustee Hullinger, featured in this brief documentary, was instrumental in my getting started in NYC. We did some sociodrama with her clients and saw a lot of breakthroughs. I urge you to vote for her video to receive an award. At about 19 seconds a thumbs up button will appear.

posted by Rich and Joyce Swingle @ 5:48 AM   0 comments links to this post

Our play, Beyond the Chariots, was translated into Chinese, Korean and Spanish for the Beijing Olympics, and for Vancouver 2010 we had audience members who benefited from the translations at all but one performance. We had a group of Spanish-speakers who we thought would be attending that day, so we scrambled to integrate the third translation. They didn't end up making it, but there was a family in Seattle that appreciated our efforts at a post-Olympic performance on our way back to New York City.

Our post-performance conversations were also enriching. We chatted with Leslie Lewis Sword, who performed Miracle in Rwanda in the same venue in which we performed Beyond the Chariots at the Edinburgh Fringe Festival. Ron Reed, the artistic director of Pacific Theatre, hosted a Christians in Theatre Arts Conference in 1993, which confirmed the calling I was sensing to move to New York City. He was able to attend our play, and we grabbed a meal afterward with Wanda Reinholdt, stage manager of Burnt Thicket, the group producing the other play running in Pacific Theatre through the Olympics, Hockey Dad, performed and co-created by James Popoff. Deb Sears was at Pacific Theatre during that 93 conference, and she was able to attend Beyond the Chariots as well. She's now involved with the independent film scene in Vancouver. Numerous More than Gold CaPA artists were able to attend both of our plays. After performing an excerpt from Beyond the Chariots at the senior center, which operates in the same building as Pacific Theatre, several were drawn to the play, including a 93-year old man who recalled a lunch with Harold Abrahams in 1943. Abrahams was the rival of Eric Liddell, featured in Chariots of Fire as well as our play which tells the rest of the story from Liddell's perspective.

We also had English speaking audience members from all over Canada, the US, Brazil, Indonesia and Russia.

Even our encounters with people on the streets of Vancouver were full of surprises: Korean speakers at a sushi restaurant, a professor of theatre in Korea we met in Stanley Park, and some folks near the steam clock that remembered my performance in Beijing! Someone pointed out that all of these Divine appointments should encourage us that we were on the right track.

To see photos from the trip, visit our photo album, "Vancouver 2010" at Facebook.com/RichDrama.

Before our performance on Friday, an actor was checking out Pacific Theatre for upcoming performances of her one-woman play. When I heard that she was a solo performer I invited her to see Beyond the Chariots. I try to see as many one-man plays as I can, so I figured she'd want to do the same thing. Indeed, she stayed. When the introductory slides came up and she saw the title of the play she remembered that we'd shared the same theatre for the Edinburgh Fringe Festival in 2007! Her show, Miracle in Rwanda, was sold out before her first performance, so Joyce and I were only able to see it because she added shows to her line-up. It was amazing! As you walk into the theatre space, there is a small square marked on the stage with white tape. As the play progresses, we discover that eight people hid in a bathroom the size of that square during the Rwandan genocide. Leslie's play has a strong message of forgiveness and reconciliation despite the worst of atrocities.

posted by Rich and Joyce Swingle @ 3:02 PM   3 comments links to this post

The Olympic Caldron at dusk 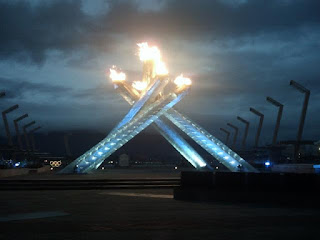