MasterWorks is off to an amazing start! The students we have this year at MasterWorks are amazing! Their gifts and talents, as well as their hearts for the Lord are just mind-blowing.

posted by Rich and Joyce Swingle @ 9:59 PM   0 comments links to this post

Last night I performed The Acts at the downtown Orlando Salvation Army. Afterward a gentleman in a Salvation Army Adult Recovery Center (ARC) came up to me and said, "So what do I do?" I asked him what he meant, and he said he'd prayed the prayer during the close of the play to commit his life to Jesus, and he wanted to know what the next step was to grow in his relationship with the Lord! There was another ARC resident who got a degree in theatre before getting off-track. I'm putting him in touch with a dear friend who went through the ARC program in NYC, and is now working in the arts full-time.

The poster is for the next event where I'll be performing The Acts. Appreciate your prayers that it will help bring about more life transformations.

In the shadow of justice there is Compassion Corner I taught a sociodrama (www.RichDrama.com/WorkShops) master class at the Christians in Theatre Arts (www.CITA.org) National Conference in Orlando. We started the class at the conference, where I taught the history and basics of the dramatic/therapeutic form, then we took a free (thanks Orlando!) public bus to Compassion Corner, shown here, across the street from the courthouse. It's an ideal location for them, since their prime focus is helping clients move through the legal system as they look for jobs and housing. It's given them great visibility, and they now have volunteers from 14 churches and at least 9 denominations (off the top of the leaders' heads).

We had an amazing sociodrama with their clients. Our warm up was done in four small groups in which they had to come to concensus on a shared dream. Two of the groups had a dream of greater compassion in the world. They beat out dreams of family and a home.

The scenario was a rich man (played by a client) walking past a homeless woman (played brilliantly by a CITA member). Someone gave her a back pack, which she put on her back. The clients said, she wouldn't be wearing it because she'd have been carrying it too long. So we put her on a park bench. On the first pass the rich man moved away from her with a grunt. Then we talked about how the rich man could show more compassion. He took some suggestions from the group, and stepped back into the scene (this time played by a second client who tagged in with some great ideas). The rich man struck up a conversation, and he happened to comment on her sun glasses. She said she got them at the Salvation Army, and he said he used to go there. We talked about how we all have had low spots in our lives, so we prayed that people would be less inclined to look down on people who are there right now.

posted by Rich and Joyce Swingle @ 4:44 PM   1 comments links to this post I'm at the Christians in Theatre Arts Conference (www.CITA.org) in Orlando. This morning I'll be doing a master class on sociodrama, which will start at the conference, and then move down the street a few blocks to incorporate Compassion Corner clients, who are working to get their lives back in order. Sociodrama's a tool to do just that, so I'm expecting miracles... Literally.

posted by Rich and Joyce Swingle @ 6:53 AM   0 comments links to this post I just arrived at Star Lake, where I'll be working with the cast of CAST, the Salvation Army's Creative Arts Service Team. What a joy to work with actors, where the only Star is Jesus. That's quite liberating!

Now we're on lunch break, and I have to say that they're quite a talented bunch. We're having a ball!

In the fiery furnace

She shared how her pastor was called to minister in a place quite closed to Christianity. He went to call on a leader in that place, and the security guard asked him why he was there. He told the guard that he was there to share the Good News of Jesus Christ. The guard told him to throw his Bible in a furnace before entering the house. The pastor told him he couldn't do that because God's Word was too precious to him The guard said, "Then put your arm in the furnace." The pastor did, and when he pulled it out, it was unharmed. Not a hair was singed. The guard had him put it back again and again. Each time the arm was unharmed.

Pray for God to do even more work in South Africa and around the world, including the US. We got to hang out with the miraculous Sanborns today.

Art, who was paralized from the neck down, was telling us how (before he worked his way up to 150 push-ups and 6 mile runs) he couldn't even communicate with anyone but God after his swimming accident. Now he's grateful for those extended periods of connection with his Healer.

Ellen reminded us how, as an 18 year old she turned down the opportunity to have a West End credit when she read the script of the show in which she'd been cast: Hair.

David, who has miraculously overcome death and other ailments, continues to perform his one-man musical, King David (KingDavidMusical.com) through the end of June.

Read my review, posted here on 6/6, which includes a link to Art's book.

posted by Rich and Joyce Swingle @ 3:04 PM   0 comments links to this post

Living as a Called Person

While prepping for MasterWorks, which starts in a matter of days, I decided to recommend Chapter Five of Gordon MacDonald's Ordering Your Private World: "Living as a Called Person". I first read the book when I was the students' age. Back then I set out to read at least part of the book every year. Rediscovering this chapter makes me want to get back on that pattern.

posted by Rich and Joyce Swingle @ 8:58 PM   0 comments links to this post There will be a concert this Sunday at Union Theological Seminary in the James Chapel beginning at 6:30PM.

MasterWorks students (from left to right) Caroline Chehade, Paulina Papölöne and Laura Hairgrove will be performing. The concert will be a fundraiser for a tour they're doing with a number of other MasterWorks students later this summer. They will perform in Finland and Hungary.

posted by Rich and Joyce Swingle @ 7:58 PM   0 comments links to this post Christian Comedienne, Donna East (DonnaEast.com), will perform at WCCC on Saturday, June 20 at 7pm. She'll be bringing clean comedy for the entire family. Speaking of which, she's got plenty of fresh material based on her new role as mommy.

Get prepared for the healing art of the belly laugh.

Send your friends to WestchesterChapel.org/DonnaEast.

Admission is free, and an offering will be collected. > Here's a visual prayer that we will shine God's love around this
> city, which can be so dark at times.

Our friend, David Lander, was nominated for a Tony Award. Just being nominated is a great honor, and the plaque they gave him is huge, but we're hoping his name is called tonight.

The nomination is for his lighting design on 33 Variations, which featured Jane Fonda.

David was the lighting designer for our Off-Broadway run of Beyond the Chariots, paired with my friend Roger Nelson's The Man from Aldersgate.

posted by Rich and Joyce Swingle @ 6:19 PM   0 comments links to this post

I was sorry our friend, David Lander, didn't win for his lighting design on 33 Variations, but we'll be rooting for him Sunday night when they're handing out the Tony's! David's plaque for his Tony nomination is HUGE! GO DAVID! 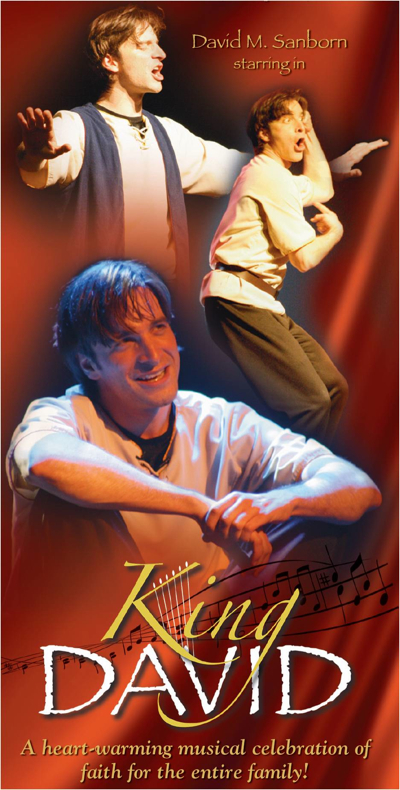 The New York Times was right! It's a "first-rate" production. He does impersonations of one Hollywood superstar after the next. As fun as the impersonations were, there were moments where he was deeply emotionally connected. Despite having performed it since April (quite a nice run for these parts), there were times that his face was drenched with tears. At other times he's like a little kid playing in a sandbox.

In these days of so many distractions I always feel so rewarded by the intense focus and energy it takes to perform a one-man play. David made me appreciate it from another angle: I forget it takes focus and energy to follow a one-man play! We become so used to the artists providing all the details, but there's something akin to reading a novel that happens when the brain gets a chance to fill in some of the gaps in solo theatre.

David and his mother, Ellen, chose their cuts judiciously from Christian and Jewish translations of First and Second Samuel, and they've found a great dramatic arc from his confrontation with Goliath to the birth of Solomon. They've interspersed it all with Davidic psalms set to music which delightfully foreshadows the Sanborns' musical, Judah Ben Hur, advertised as coming to Broadway in the fall of 2010.

David and I recently saw Irena's Vow on Broadway. He took inspiration from how Irena's daughter came out and spoke after the play. David (Sanborn) came back after a robust applause to briefly tell how, like King David, his life had been impacted by G-d's relationship with man. He then went on to tell how his own father, Art, had been paralyzed at the same level as Christopher Reeve, but Art now runs six miles a day. Then he invited people to stick around in the lobby (don't miss this!), where they begged him to tell more details. He talked about the accident, the recovery, starting with the miraculous movement of a pinkie, to his three repetitions of one push-up, to his three reps of 50!

When I arrived in Singapore to perform in the world premiere of Judah Ben Hur in 2001 the accident was quite fresh. Everyone was abuzz about his near-drowning and the recovery. I was told that I would have no idea to see him that he had been completely paralyzed below the neck. Because I have experienced miraculous healing in my own body and in the lives of those I know well, I was on high alert. But it wasn't until I was in conversation with him that I discovered that was Art!

The whole story is told in Art's book: Walking Miracle.

posted by Rich and Joyce Swingle @ 6:27 PM   1 comments links to this post posted by Rich and Joyce Swingle @ 9:33 AM   0 comments links to this post Now I'm hanging out and seeing sites with my brother and his wife.

posted by Rich and Joyce Swingle @ 9:33 AM   0 comments links to this post